Our breeding program is deceptively simple and has withstood the test of time. We breed front line top quality field trial Labrador Retrievers. Performance, trainability, and desire is what we strive for in every breeding.

Dedication to the retrieving sport has resulted in us being tremendously successful breeders. That puts us among the top field breeders in North America.

Right off the bat I want to make clear that field Labradors make great pets. Why wouldn’t they? They are bred for intelligence and trainability. All labs of reasonable breeding should have great temperament too. Ours are no exception. That’s one of the strongest traits of the breed. Most of the pups we produce live in someones house being a loving and devoted family member. A lot go to hunting homes as well.

A Teeny History of The Labrador Retriever

There is a great book written by Dr. Bernard W. Zeissow called ‘The Official Book of the Labrador Retriever’. If you want to know just about everything about the breed, I highly recommend it. I consider it the bible of Labradors.

The modern Labrador originated in Newfoundland, long before they were part of Canada. The ancestors of the dog are open to question but may be The Newfoundland Dog or some other dog that was brought over from Europe by fishermen. More than likely a combination of a variety of dogs. Google has reams of searchable history so me repeating it is pointless. The Labrador retriever of today, however, has been refined into a whole bunch of different subsets of the breed. Show, Field, English, North American. They also come in different color varieties of black, yellow and chocolate.

We breed what’s known today as field labs. They used to be just labs. Because of the split in the modern breed, there are now a differential of characteristics. Show labs are bred for a certain look. ‘British’ labs are bred to play the British field game which are quite different than our Field Trials in North America. Our trials require a dog of exceptional retrieving talent, drive and physical ability.

You can take pretty much any Labrador hunting  with you. It takes a minimal amount of training to get them used to birds and guns. Even if you have some cross bred dog that looks like a Labrador he’ll probably do ok. Other hunting breeds even do ok when it comes to do basic retrieving and sniffing skills. I believe though that if you owned only one hunting dog, a Labrador can do the best all around work. He can track upland birds better than a Pointer can do a long water blind for instance. Labradors are exceptionally trainable and want to please you more than anything else. 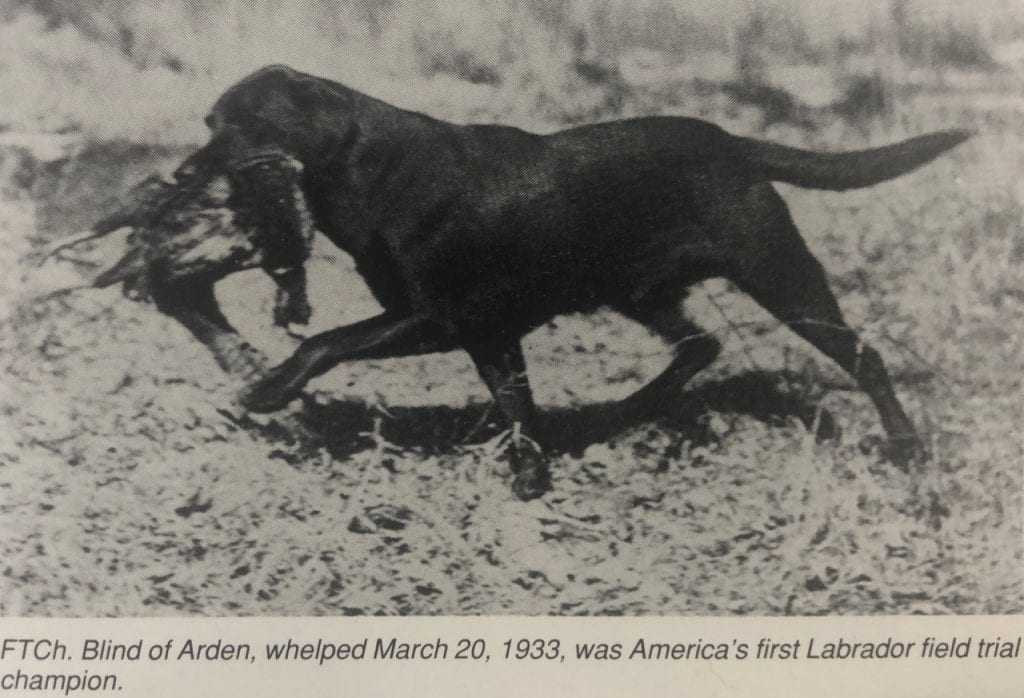 The Field Trial Game and Our Involvement in Alberta

Here’s where I’m going to explain why the Field bred Labrador is unique and superior among Labradors. I could show you picture after picture similar to the one above and directly link our pedigrees back to dogs of that era. I knew owners and breeders that were before my time that had dogs from those lines and beyond. There was a fellow in our area by the name of Munroe Coleman who owned Carnmoney Kennels, for instance. I literally missed meeting him by 1 month when he died, but he left a legacy in the breed. A very good friend of mine by the name of Leo Rurka owned a dog by the name of Carnmoney Bandit. Leo and I used to sit and talk about dogs and training literally until the sun would come up many nights, maybe over a couple drinks of whiskey. Bandit was alive in the late 1960’s. You may not recognize the name but the direct lineage goes Bandit – Rays Rascal – Rascals Super Spud – Walforfs High Tech – Ebonstar Lean Mac(Maxx). I also knew Maxx’s owner, Jock McLean, in the early 1990’s. Maxx was a brilliant young dog back then and went on to become a foundation stud. I also knew Maxx’s breeder, Ray Stevenson. As a matter of fact, we had a sister to Maxx ourselves, Ebonstar My Gal Sal. My point is we’ve been around the game and know some of the dogs in our recent past (30 years) who have become influential. I think it gives me a certain insight also to spot a good young dog by his working characteristics, not just the points he’s amassed. Ebonstar Lean Mac and Carbon Copy of Horn Creek are a couple examples. I bred to both of them before they ever became Open All Age dogs. Their talent was inevitable to me.